Obsessive-Compulsive Disorder (OCD) is a mental health condition that affects every conceivable aspect of your life, including oral hygiene.

How to Moderate & Control OCD with Oral Hygiene

Obsessive-compulsive disorder is a serious and pervasive mental health condition. The overpowering thought processes associated with OCD are oftentimes focused on cleanliness. Oral hygiene is one such area where people with OCD tend to focus on. The obsessions (the pervasive thoughts) and compulsions (the actions) combine to create the disorder known as OCD. The individual often has no control over these invasive thoughts which overtake all sense of logic, despite the individual understanding that the thought processes are inherently flawed.

While some people are able to hide their OCD from the outside world by keeping their thoughts to themselves, the disorder is alive and well in the patient. There are many ways that OCD is expressed in people, including compulsive tooth brushing. At first glance, such actions may appear to be helpful in maintaining good oral hygiene, but this is far from the truth. Periodontists caution strongly against overzealous toothbrushing, particularly with the wrong toothbrush, the wrong technique, and the wrong frequency. Unfortunately, people suffering from OCD are never satisfied with the cleanliness of teeth and gums.

In an effort to alleviate the obsessive thoughts about germs and bacteria, the compulsive action of over-brushing takes place. This type of behavior has to be addressed swiftly before irreparable damage is caused. It doesn’t take too much excessive brushing to cause permanent damage to the teeth and gums. The official term for it is toothbrush abrasion. This is the process by which gums begin to recede away from the teeth, eroding the enamel, and exposing sensitive root surfaces. Once this happens, extensive repair work will need to be undertaken to make it bearable for patients to eat, drink, and breathe properly.

Once your guns have been pulled away from the tooth surface, the root surfaces are exposed. This is one type of periodontal disease that can occur. Poor oral health – over brushing in this case – can result in this. More importantly, receding gums can ultimately lead to tooth decay and tooth loss. For people with OCD, aggressive brushing over a long period of time can result in periodontal disease. But it’s not only excessive toothbrushing, it’s also the result of inadequate toothbrushing. People with OCD tend to focus on doing too much, they are generally not prone to under-brushing their teeth. 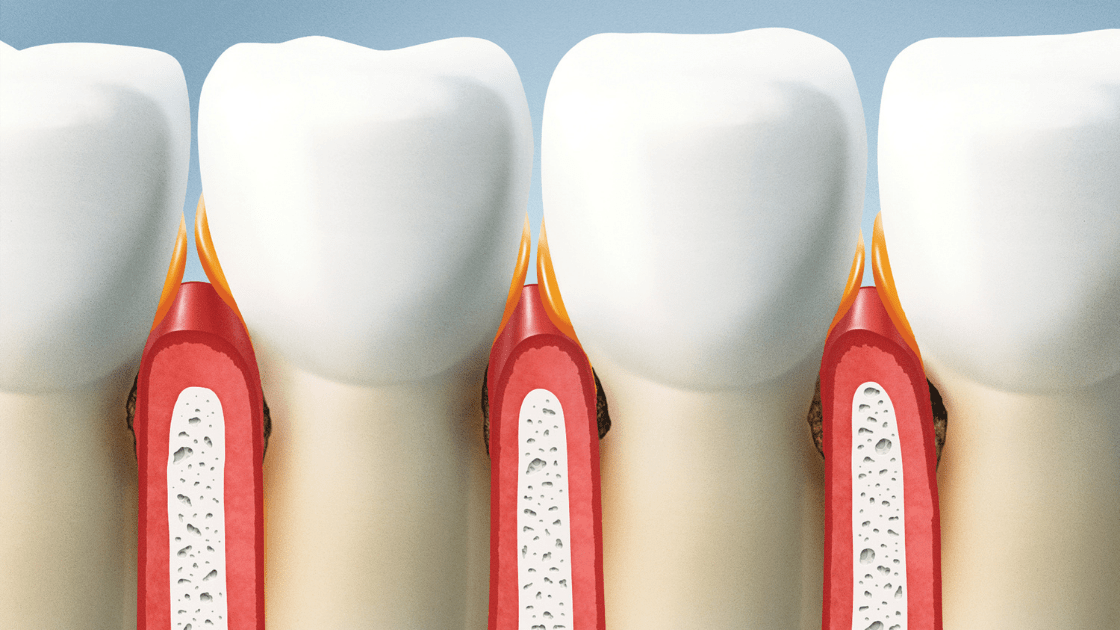 There are many symptoms associated with over brushing and receding gums. These include loose teeth, exposed root surfaces, shrinking/receding gums that are easily seen, bad breath, pain at the point where the gum meets the tooth, inflamed gums, and regular bleeding when flossing teeth and brushing teeth. Dentists have a variety of tools at their disposal to tackle the issue of receding gum lines. The first line of defense is putting an end to the incorrect toothbrushing behavior that is driving the receding gums, to begin with. With OCD, it can be much more challenging to stop bad behavior, because the individual believes that what they’re doing is necessary to maintain good oral health.

There are ways to address the OCD-induced over brushing, but it’s not simply a matter of a dentist instructing a patient to stop performing a certain action. Therapy and medication are often the first lines of defense when treating OCD. The goals of the therapist are clear: exposure-response therapy. The therapist explains and demonstrates why it is unnecessary to over brush one’s teeth, and why this behavior will not help but actually harm oral hygiene.

OCD treatment options begin with therapy and medication, and progress to nonconventional measures which have also proven to be highly effective at reversing the symptoms of OCD. These include ECT (Electroconvulsive Therapy), VNS (Vagas Nerve Stimulation), and TMS (Transcranial Magnetic Stimulation). The latter treatment is fully FDA-cleared and is the only one that does not require surgical procedures, sedatives, or anesthesia. It is 100% outpatient, the patient is fully awake, and sessions only last 20 minutes – 40 minutes each, 5 days a week, for 4-6 weeks. It requires the use of an electromagnetic-inducing helmet that targets problematic areas deep within the brain and can safely and effectively alleviate the symptoms of OCD.

Important Point About Over Brushing and Periodontal Disease

The normal pocket size ranges between 1 mm – 3 mm. Gum disease is characterized by anything larger than that. Dentists often refer patients with clear signs of gum disease to a periodontist. If the gum expert has ascertained that there is a bacterial infection, antibiotics will be prescribed. These come in different forms, including antibiotic gel and captions. Patients may also be required to use antimicrobial mouthwashes and enzyme suppressants. The California Dental Association has estimated that 70% of adult tooth loss is directly attributed to periodical diseases. Such is the seriousness of this condition that grafting with flap surgery may be required to remedy it.

What is a Gum Stimulator, Purpose and Usage Instructions?